I was never a popular kid in school.  That includes elementary, definitely junior high, and worst of all – high school.  There were always friend groups, we were the islands of misfit toys that stuck together as outcasts.  But prom queen or captain of the cheerleading team just wasn’t in the cards for me.  So that first day of seventh grade, walking up to my locker only to find the most beautiful boy I had ever laid eyes on, putting his books in the locker right next to mine wasn’t exciting.  It was like a punch to the gut because I knew someone like him would never ever ever have time for someone like me.  In the junior high feudal system I was the serf and he was the king.  I was confined to worshiping him from a distance, and good lord did I worship.  His name was Jake (cue John Hughes movie-any of them) and he was your typical popular athlete who seemed to have all the things going for him.  He was tall and played basketball, he had an older brother who had already secured lasting popularity for all of his younger siblings, and he came from money.  He seemed to always be surrounded by friends and appeared to be living an uncomplicated and easy life.

Now let me paint you the picture of me.  Awkward, painfully uncomfortable in my skin, poor, with a deep longing to fit in that practically seeped out of my pores.  And I wore glasses.  Not cute, trendy ones, but rather over-sized, multicolored silly looking glasses.  My self-confidence was non-existent, and I spent most days at school just trying not to garner the attention of someone who felt like beating up a loser. 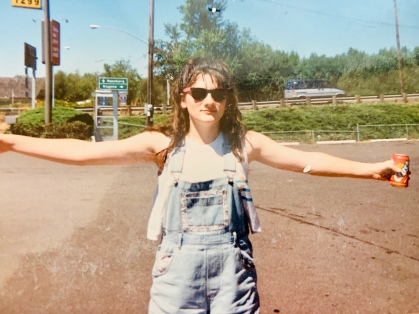 The best part of my school days throughout junior high and on to high school was by far, Jake.  I would have a class with him here and there, and would steal glances at him every chance I got.  Looking back, I’m sure I seemed like a complete psycho but at the time I just assumed I was invisible.  To me, it was obvious that of course Jake never saw me looking at him, he never saw me in general.

Walking to class one day with a friend, I was going on and on about how cute Jake was – how I didn’t have any idea what I’d say or if I would even be able to formulate words should he ever talk to me.  Right about that time I happened to glance behind us.  Guess who was walking right there, in his black Nike jacket and smelling of CK Eternity, hearing every mortifying word come out of my mouth?  Jake, of course.  Such is life.

So in my sophomore year when I found out there was going to be something called an Armory dance in a town about 30 minutes away from mine, and my parents actually said I could go with some friends, I had no idea how my plain little existence was going to take a sharp turn upward with none other than Jake himself.  For some reason my normally overbearing parents who didn’t let me walk a few blocks home from marching band/color guard practice, let alone give me permission to go to a neighboring town with other teenagers for a dance, said I could go.  I honestly have no recollection of how it came to be that they agreed to this but I’m sure it had to do with an unreasonably early curfew and the threat of being grounded for life if I got home late.

The night of the dance finally came, and there I was in my best friend’s car with her and another girl.  We had the radio blaring, ecstatic that we were on our own in the world, being allowed to stretch our boundaries.  I had the earliest curfew on the planet but my friends understood and agreed that we would leave the dance pretty much right when it was getting started.  We arrived at the armory (seriously–what the hell is an armory and why do they have dances??) feeling empowered and excited.  There would be kids from both towns here – we were in the big leagues now.  As soon as we walked in, I went right up to the DJ booth and as only nerds do, requested my favorite song at that time – The Dance, by Garth Brooks.  We then proceeded to wander around the large space, drinking in the joy of being out on our own.

It didn’t take me long to spot that face and the curly brown hair – OHMYGOD Jake’s here!  I squealed to my friends (and probably to everyone around us – my infatuation with this kid made it hard to know when my assumed indoor voice was actually a booming shout).  Sure enough, there he was once again surrounded by people.  This time he was with several guys from our high school basketball team.

I started to fantasize about asking Jake to dance.  What if he said yes?  What if it made him realize how awesome I really was, and we started dating?  Hey-a girl can dream.  My teenaged heart was all aflutter.  I voiced this insane idea to my friends who of course, knowing it would never happen, told me I should totally ask him.  Were they crazy?  Just the thought of asking Jake to dance made my stomach flip.  He’d say no, I would be heartbroken, life would be over and I would never be able to show my face at school again.

As the night went on, a little ember began to grow in my mind.  Maybe I could ask him-if one of my friends also asked one of his friends.  That way when both boys said no to us, it would soften the blow because hey-at least she would’ve been turned down too.  Misery loves company, right?  I’m sure there’s a logical fallacy somewhere in that thought process but to me it seemed perfectly reasonable.  My friends and I were having a great time people watching and bantering back and forth about me asking Jake to dance, and before I knew it, it was already time to head home.  I kept dragging my heels, hoping to stay just a little bit longer but finally my friend said to me – We need to leave NOW.  If the next song is slow, you go ask him to dance.  If it’s not, WE ARE OUT OF HERE.

The song ended.  And as I heard the first chords of the next song start to play, my stomach did all the flips.  The Dance, by Garth Brooks.

It’s now or never Layla, let’s do this.  In some kind of daze, palms sweaty and heart racing, I walked up to Jake who stood in the very center of his tall friend group, looked him in the eye, and asked, Hey Jake, wanna dance?

As I was beginning to back away, expecting the impending HELL NO!  I heard him say ‘sure’.

Just like that, we were walking to the dance floor together.  Now, in my mind, I could swear to this day that the couples already dancing cleared a path for the two of us to walk right into the middle and into the spotlight but that’s probably just my 15-year old mind embellishing a bit.  Regardless of how it actually played out, the fact was that I was now slow dancing with Jake – my arms around his neck, his hands on my sides, very PG but also the most erotic experience in my life up to that point.  Each time he breathed out, I could smell his CK Eternity.  To this day that scent is a sweet piece of nostalgia for me.

My friends were in a bit of shock that I had actually done it-more so that Jake had agreed to dance with me.  My friend told me later that when she finally remembered her part of the deal and walked up to Jake’s friend to ask him to dance as well, she basically dragged him onto the dance floor without giving him a chance to object.

I never once looked at Jake during our little dance.  I was probably in shock.  It really felt like your standard coming of age movie where the girl pines away for the guy, never thinks she’s got a shot, and then somehow – some way – he notices her back.   It’s such a great dream for us geeky kids and in that 4 minutes, my little dream came true.  As the song ended, as they inevitably do, I don’t remember saying anything to Jake – I probably just walked away and I have no doubt he was confused by the strange girl who kept her head down the entire time he was dancing with her.

Back in the car with my friends, I think we screamed for a solid 10 minutes straight as we barreled down the highway, trying to make sure I got home on time.  And that was it – no, Jake and I never dated or spoke afterwards.  Our brief dance was the crescendo.  His motivations for accepting my request for a dance are completely unknown.  Unfortunately, Jake passed away at the age of 21, making the experience that much more important.  The lyrics to the song we danced to took on a deeper meaning.

Our lives are better left to chance

I could’ve missed the pain, but I’d of had to miss the dance

To this day, every time I hear it I think of Jake.