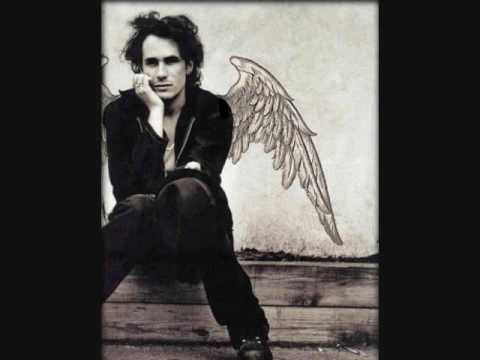 I dreamt about Jeff Buckley last night. The dream was so vivid; so compelling, that I had to email one of my oldest friends and tell him the entire story this morning during my commute to work. In the dream, several close friends and I had ventured back in time for the specific goal of seeing a live, intimate Jeff Buckley performance. We walked in the side door of a small and dimly lit bar. To the right was a miniscule stage, and there under a single blue spotlight stood Jeff himself, in all his subdued brilliance. It was just him – looking like I always imagined he would. Youthful, tortured, purposely exposed for us to see. He played his set and afterwards my friends and I gathered towards the front of the stage for a chance to meet him. He sat alone on a couch, smiling and motioning us over. I eagerly stepped forward and took the spot right next to him. We talked, I couldn’t even begin to explain the topics. The time went by slowly and instantly all at once. Suddenly I was overcome with a deep, aching sadness and I started to cry. I cupped his face in my hands and told him how I missed him so much, already, even though we were there in that moment, having a conversation. I couldn’t tell him why I was so sad; it would’ve made no sense to say I wasn’t from that time.
There was no way to warn him about the ending he would experience; regardless, I HAD to say something. All I could think of was to say, “Please – you have to take off your boots. You HAVE TO TAKE THEM OFF.”
In an inexplicable way, I sensed he knew I was trying to warn him.

And that was it – I woke up feeling that same hollow feeling I felt when I found out he had died.

I was not fortunate enough to ever see Jeff live in concert. He came to Denver in September of 1994 and right after that is when I started to hear him on the radio. His single, Last Goodbye, was being played on KBCO and my friends and I could not get enough. We bought his CD and subsequently played it on repeat for the next several months. I remember sleepovers with a friend where we would listen in awe to the entire CD, not believing how amazing Jeff’s voice was and how intense the whole experience of the collection of songs.
Another evening was spent with a different friend, the one I first told about my dream, analyzing and overanalyzing the lyrics to ‘Lover, You Should’ve Come Over’. Did they just break up? Did she die? Did she dump him? Did he dump her? We came to the conclusion (right or wrong – doesn’t really matter, does it? That’s the beauty of the subjectivity of music) that it’s just a really epic song conveying the agony of, ‘we broke up’.
A couple of years went by. I was now living in Alaska and serving in the Air Force. Every now and then, after particularly hard, long days, I would come home and spend the evening with Jeff. I’d turn all the lights off, light a couple of candles, pour myself a generous glass of wine, sit on the couch facing my stereo speakers, and blast Grace from beginning to end. It’s still my favorite way to listen to the album.

It was during this time in Alaska as I was preparing for my wedding that I first heard about Jeff’s untimely passing. My mother had flown up to help with the wedding and one day, I insisted she listen to my favorite singer – Jeff Buckley. She furrowed her brow and said, “Honey, I think I read an article about him drowning a couple weeks ago.”
After much back and forth, and me pressing her to be sure it was the same Jeff Buckley I listened to so often, reality set in. Gone too soon. So achingly unfair. Such a loss of unbridled, pure talent and potential.

I’m listening to Jeff full blast in my headphones as I write this – after 25 years of Grace, and God only knows how many times over the years I’ve heard these songs, I still get the chills at least once on each and every track. If that isn’t a legacy, someone should sit me down and explain to me what is. For someone’s music to affect people (me) the way Jeff’s did, and still continues to do, it highlights his lasting contribution to music and to something pure.